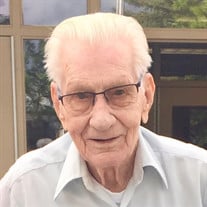 Adolph “Whitey” Schieve, 96, of Watseka, IL, passed away on Wednesday, February 19, 2020. He was born on May 30, 1923 in Douglas, ND, the son of Heinrich “Henry” Schieve and Pauline (Weidner) Schieve. Whitey worked for Illinois Bell for many years. He served in the ARMY during WWII as a Platoon Sargent for the 28th Infantry “Bloody Buckets”, where he received the purple heart. Adolph married Betty Stutler in Chicago at Good Sheppard Lutheran Church on January 4, 1947. Whitey was a member of the Watseka American Legion Post #23 and the Watseka VFW. He enjoyed many things including fishing, playing the harmonica, storytelling, dancing and traveling with the love of his life. He was also a hobby farmer and liked to raise animals. Most notable though is that he was a friend of many and was loved greatly by his family and friends. Surviving Mr. Schieve is two daughters, Sandra (David) Brooks of Rock Springs, WY, and Tammy Crawford of Watseka; sisters, Martha Reiter of Orland Park, IL, and Irene Schlemmer of Orland Park, IL; grandchildren, Joy (Scott) Burgener, Cindi (Ronny) Cain, Danice Newman, Daina (Nick) Gregory, Shelby Crawford; great-grandchildren, Ella, Baylie, Chasine, Jack, Kellen, Nia, Gilian, and Brycen; and several nieces and nephews. He is also preceded in death by his parents; wife, Betty; four brothers, William, Richard, Edmond, and Henry; four sisters, Helen, Frieda, Elsie, and Eleanor; and one grandchild, Cory Crawford. Visitation will be held on Monday, February 24, 2020 from 9am to 12:00pm, at Baier Funeral Home in Watseka, IL. Funeral Services will follow at 12:00 pm. Pastor Joseph Hughes will officiate. Burial will follow at Iroquois Memorial Park in Watseka, IL. Memorials in Mr. Schieve’s name can be made to IMH Hospice. Concluding Graveside Services there will be a Celebration of Life at Traditions Bar located in Watseka, IL.

The family of A.F. Whitey Schieve created this Life Tributes page to make it easy to share your memories.

Send flowers to the Schieve family.