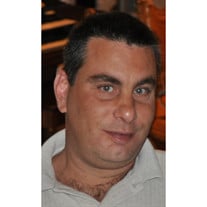 Anthony “Tony” Tuminello III, 49, of Watseka, passed away on Wednesday, April 20, 2016. He was born on February 10, 1967 in Chicago, IL, the son of Anthony Tuminello II and Mary (Sansone) Tuminello. He enjoyed spending time with his family, dog “Milo”, and being outside Surviving Mr. Tuminello are his parents, Mary Tuminello of Watseka, Anthony and Martha Tuminello II of Rio Rancho, New Mexico; one brother and sister-in-law, Frank and Rhonda Tuminello of Plainfield, IL; two nieces, Francesca and Angelina Tuminello; two aunts; and four uncles. He is also preceded in death by two grandfathers and one grandmother. Visitation will be held on Monday, April 25, 2016 from 3-7pm, at Baier Funeral Home in Watseka. Funeral Services will be held on Monday, April 25, 2016 at 7:00pm, at Baier Funeral Home in Watseka. A prayer service will take place prior to Funeral Services. Father Michael Powell will officiate. A private interment will follow Tuesday, April 26, 2016 at Oak Hill Cemetery in Watseka, IL. Memorials in Mr. Tuminello's name can be made to the family.

The family of Anthony "Tony" Tuminello III created this Life Tributes page to make it easy to share your memories.