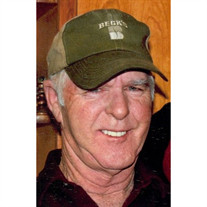 Artie Lee Bratcher, 68, of Watseka, IL, passed away on Thursday, December 24, 2015. He was born on September 21, 1947 in Watseka, IL, the son of Arthur Bratcher and Hazel (Kessinger) Bratcher. Artie married Louanne Nordmeyer on July 8, 1978 in Clifton, IL. Mr. Bratcher served in the ARMY from 1968 until 1972. He earned the Purple Heart in Vietnam, and was the youngest solider to earn the rank of Captain in Vietnam. Mr. Bratcher worked for Watseka Interstate for 38 years. Artie was a member of the Elks, the American Legion, and the VFW. He enjoyed fishing, hunting, and flying. Surviving Mr. Bratcher is his spouse, Louanne Bratcher of Watseka; first wife, Lonita (Loni) Burger of Omaha, NB; two sons and daughter-in-law, Eric and Kim Bratcher of Hayward, CA, and Alan Bratcher and fiancée Megan Carmain of Watseka; one sister and brother-in-law, Shirley and Robert McCullough of Watseka; four nieces and nephews, Janet Anderson of Sycamore,IL, Danny McCullough of Watseka, Judy Mae Bingman of Savoy, IL , and Patti Jo Jenkins of Flora, IL; and a special friend, Theresa Fowler of Watseka. He is also preceded in death by both his parents; two sisters, Carol Ann Bratcher, and Toni Rae Bratcher; one niece, Brenda Haven; and mother-in-law, Blanche Reid. Visitation will be held on Tuesday, December 29, 2015 from 4-7pm, at Baier Funeral Home in Watseka. Funeral Services will be held on Tuesday, December 29, 2015 at 7:00 pm at Baier Funeral Home in Watseka. Pastor Nourie will officiate. Burial will be held at a later date. Memorials in Mr. Bratcher's name can be made to the Family or Donor’s Choice. Cremation Rites will be made accordingly following the services.

The family of Artie Lee Bratcher created this Life Tributes page to make it easy to share your memories.

Artie Lee Bratcher, 68, of Watseka, IL, passed away on Thursday,...

Send flowers to the Bratcher family.