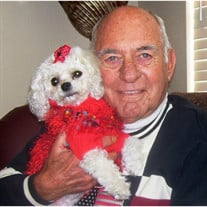 Beloved father, Bert Byrle Eckstein II, age 83, of Leesburg, FL, formerly of Sheldon, IL, moved to Heaven joining his Lord and Savior February 29th, 2016. He was preceded in death by his first wife, Arlyss Munsterman and his second wife Gladys (DeMent) Flota. He was the son of the late Homer and Aileen (Hocutt) Eckstein of Donovan, IL. His sister Phyllis (Jim) Schultz, his grandson Jonathan M. Eckstein, and his devoted dog, Suzie, also preceded him in death. Three children survive: Bert Eckstein III of Chicago Ridge, IL; Arlyn Eckstein of Leesburg, FL; Arlyn’s twin sister, Arlynda Eckstein also of Leesburg, FL; and a great grandson, Emrys Eckstein of Goldwaithe, TX. Also, surviving are step children, Danna (Darrel) Fischer of Watseka, IL, and Stan (Brenda) Flota of Florence, MS. Step grandchildren and great-grandchildren survive as well. Bert was born June 13, 1932, in Watseka, IL, and graduated from Donovan High School in 1950. He enlisted in the Air Force in 1952 and served in the Korean War where he was stationed as Control Tower Chief in Japan. He was married to Arlyss Munsterman from 1955 until her death in October of 1976. He later married Gladys Flota in 1981, and they were married until her death in 2007. Bert worked as an agent at Iroquois Insurance in Watseka, IL, and Allstate in Kankakee, IL, where most all of his clients became his friends? Bert officiated as a layman and sang at the Woodland United Methodist church, served as a member of the Woodland Schoolboard, enthusiastically volunteered at the VA in Manteno, became Exalted Ruler at the Elks Lodge in Kankakee, and organized and became President of the Watseka Flying Falcons. During retirement he enjoyed singing, driving a tractor for local farmers, restoring his ’56 Ford pickup, reading and watching westerns, and flying radio controlled airplanes! Eventually, he sold his Sheldon home and moved to Florida accompanied by his dog Suzie to enjoy time with the twins. Yet, he always considered Iroquois County home! In lieu of flowers, please consider memorials to the Woodland United Methodist Church as this church was dear to Bert. A wake honoring Bert Eckstein will be held at Baier Funeral Home in Watseka, IL on Saturday, March 5, 2016 from 4-7pm. The Woodland United Methodist Church will host the funeral services on Sunday, March 6, 2016, at 2:00 pm. Committal will be a private service.

The family of Bert Byrle Eckstein II created this Life Tributes page to make it easy to share your memories.