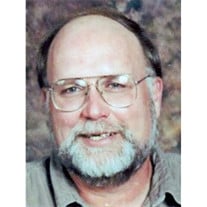 Danny C. Thomas, 62, Watseka, Il passed away on Saturday, February 13, 2016 at his home. He was born on May 6, 1953 in Watseka, the son of Oscar Thomas and Mary Ann (Reynolds) Thomas. Danny married Sue Ratliff on June 16, 2001 in Watseka, IL. Mr. Thomas was a Geography and History teacher for Iroquois West High School. He enjoyed photography and bird watching. Surviving Mr. Thomas is his wife, Sue Thomas of Watseka; mother, Mary Ann Thomas of Watseka; one son and daughter-in-law, Matthew and Mary Ratliff of Copperas Cove, TX; one brother, Jeff and Darla Thomas of Oakley, CA; two grandchildren, Corrine and Susan Ratliff of Copperas Cove, TX; and many nieces and nephews. He is also preceded in death by his father, Oscar Thomas; and one sister-in-law, Diana Cailteux. Visitation will be held on Tuesday, February 16, 2016 from 4-7:30 pm, at Baier Funeral Home in Watseka. Funeral Services will be held on Tuesday, February 16, 2016 at 7:30pm, at Baier Funeral Home in Watseka. Minister Elizabeth Reis will officiate. A private family interment will take place at Oak Hill Cemetery in Watseka, IL. Memorials in Mr. Thomas's name can be made to CAMP 911.

The family of Danny C. Thomas created this Life Tributes page to make it easy to share your memories.

Send flowers to the Thomas family.