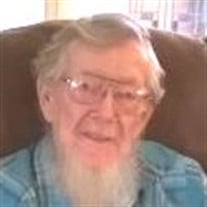 Donald H. Ehmen, 88, of Watseka passed away on Wednesday, October 9, 2019 at Riverside Medical Center in Kankakee. He was born on June 10, 1931 in Paxton, the son of Ernest and Charlotte Margaret (Gercken) Ehmen. Don married Phyllis Muehling on September 29, 1956 at Melvin Lutheran Church. Don farmed with his father until his marriage in 1956. Over the years, he has worked for several Heating, Cooling and Appliance businesses in the area, his most recent being Hicks Bottle Gas. He enjoyed hunting with his favorite Basset Hound Hercules, fishing, camping, gardening, reading and collecting Firearms and Native American artifacts. He was an avid fan of the Chicago Bears and enjoyed watching FOX News. An honorable Veteran, Don served in the United States Army. He was a member of the Refrigeration Service Engineers Society and American Legion Post #23. He is survived by his wife Phyllis Ehmen, of Watseka; three daughters Yvonne Ehmen (Joseph Adams) of Watseka and Roberts, Anita (Dale Tom) West of Watseka and Karla Ehmen (Eric McMillan) of Hoopeston; four grandchildren Abby (Scott) Barrett of Paris, Meghan Hainds (Randy Gilbert) of Spring, TX, Cody (Amy) West of Marion, IN, and Kaleb Ehmen (Rylee Glass) of Hoopeston; four great-grandchildren; and many nieces, nephews, step-grandchildren and step-great-grandchildren. Don was preceded in death by his parents, his siblings Lawrence Ehmen, Alfred Ehmen, Wilma Lee and his twin brother Delmar Ehmen, and an infant son Kenneth Dean Ehmen. Visitation will be held on Saturday, October 12, 2019 from 10am until the 11am Funeral Service at Baier Funeral Home in Watseka. The Rev. David Nabinger will officiate. Burial will take place at 1pm, also on Saturday, at Melvin Cemetery in Melvin, IL. Memorials may be made to the family wishes. Please sign his guestbook at www.baierfuneralhome.com

Donald H. Ehmen, 88, of Watseka passed away on Wednesday, October 9, 2019 at Riverside Medical Center in Kankakee. He was born on June 10, 1931 in Paxton, the son of Ernest and Charlotte Margaret (Gercken) Ehmen. Don married Phyllis Muehling... View Obituary & Service Information

The family of Donald H. Ehmen created this Life Tributes page to make it easy to share your memories.

Donald H. Ehmen, 88, of Watseka passed away on Wednesday, October...

Send flowers to the Ehmen family.