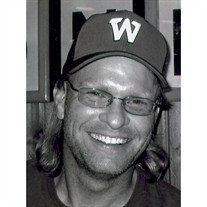 Earl J. Blair, 47, of Watseka, IL, passed away on Monday, April 25, 2016. He was born on March 21, 1969 in Watseka, the son of Marvin Blair and Dorothy (Peters) Blair. Mr. Blair married Crystal Smith in Watseka on February 27, 2003. Earl was a Productions Manager for Silva International located in Momence. He enjoyed visiting historical sites, random road trips, sports, wellness, animals, gaming and bike riding. Most of all he was a family man. Surviving Mr. Blair is his wife, Crystal Blair of Watseka; one son, Austin Blair of Watseka; one daughter, Megan Blair of Sterling, CO; father and step-Mother, Marvin and Donna Blair of Watseka; two brothers and sister-in-law, Allen Blair of Watseka, David and Theresa Kellems of Watseka; one sister and brother-in-law, Tracy and Andy Stewart of Savannah, GA; and niece and nephews, Gabriel and Brendan Kellems, Marc and Jonathan Stewart, and Kristina Howe. He is also preceded in death by maternal and paternal grandparents; mother, Dorothy Blair; and mother-in-law, Mary Smith. Visitation will be held on Friday, April 29, 2016 from 4-7pm, at Baier Funeral Home in Watseka, IL. Memorials in Mr. Blair's name can be made to the Family’s Wishes. Cremation Rites will be made accordingly following services.

The family of Earl J. Blair created this Life Tributes page to make it easy to share your memories.

Send flowers to the Blair family.