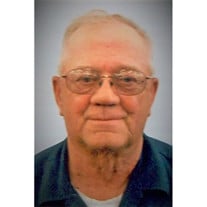 Eldon Clarence Faupel, 77, of Donovan, IL, passed away on Sunday, June 26, 2016. He was born on August 10, 1938 at Earl Park, Indiana, the son of Clarence Faupel and Dorothy (Hanna) Faupel. Eldon married Linda Tuttle on January 17, 1965 in Watseka, IL. Mr. Faupel was a Farmer and an active member of the Sheldon Masonic Masons, Danville Consistory, Donovan Farmers CO-OP Elevator Board, Ford Iroquois County Farm Bureau Board, Ditch Commissioner on Beaver 1, Trustee for Beaver Fire District, and Watseka Mutual Insurance Board. He enjoyed wood working, fishing, farming, and his family. Surviving Mr. Faupel is his wife, Linda Faupel of Donovan; one son and daughter-in-law, Dave and Molly Faupel of Donovan; one daughter and son-in-law, Jodee and Darren Bruens of Cissna Park; five grandchildren, Austin and Autumn Bruens of Cissna Park, and Kayde, Kenzie, and Kylee Faupel of Donovan; and several nieces and nephews. He is also preceded in death by both parents; and one brother, Don Faupel. Visitation will be held on Wednesday, June 29, 2016 from 4-8pm, at Baier Funeral Home in Watseka. Funeral Services will be held on Thursday, June 30, 2016 at 11:00 am, at Baier Funeral Home in Watseka, with a one hour visitation prior. Masonic Rites will take place just before Funeral Services. Pastor Kevin Nourie will officiate. Burial will follow at the Iroquois Memorial Park Cemetery in Watseka. Memorials in Mr. Eldon Faupel's name can be made to IMH Hospice or the Concord Fire District.

The family of Eldon Clarence Faupel created this Life Tributes page to make it easy to share your memories.

Eldon Clarence Faupel, 77, of Donovan, IL, passed away on Sunday,...

Send flowers to the Faupel family.