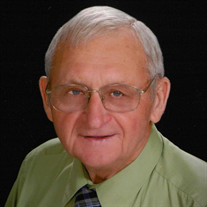 Elroy “Bud” Pfingsten, 90, of Watseka passed away on Monday, October 11, 2021 at his home. He was born near Woodworth on May 2, 1931, a son of Walter and Elma (Schroeder) Pfingsten. Bud attended St. Paul’s Lutheran School of Woodworth and later graduated from Milford High School with the class of “49”. Bud was a hog farmer most of his life. He was on the Farm Bureau for twenty years and Claytonville Oil Coop Board for many years. In his younger years, he played softball with FS and other teams. On August 12, 1956 he married Dolores Brutlag at St. Paul’s Lutheran Church of Woodworth. After retirement, he took up gardening and enjoyed sharing his produce. He loved his family and enjoyed having coffee with his morning buddies. Bud is survived by his wife Dolores Pfingsten of Watseka; one daughter, Yvonne (John) Doggett of Crescent City; one grandson, Patrick (Katie) Doggett of Watseka; siblings, Bernice Bohlmann of Danforth, Evelyn Brutlag of Danforth, Marilyn ZumMallen of Watseka, Kenneth (Linda) Pfingsten of San Angelo, Texas, and Leon Pfingsten of Watseka; and one brother-in-law, Allen Campbell of Northbrook. Bud was preceded in death by his parents; granddaughter, Rhianna Doggett; one brother, Wendell (Dorothy) Pfingsten; one sister, Dianne Campbell; brothers-in-law, Frank Bohlmann, Rev. Allen Brutlag, Marvin ZumMallen; and sister-in-law, Sue Pfingsten. Visitation will be from 9:00 a.m. until the 11:00 a.m. funeral service on Friday, October 15, 2021 at St. Paul’s Lutheran Church of Woodworth with Rev. Michael Ruhlig officiating. Burial will follow at St. Paul’s Lutheran Cemetery in Woodworth. Memorials may be given to St. Paul’s Lutheran School of Woodworth or Donor’s Choice.

The family of Elroy "Bud" Pfingsten created this Life Tributes page to make it easy to share your memories.

Send flowers to the Pfingsten family.