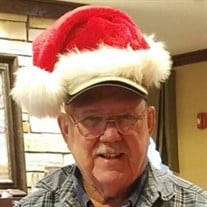 Gary S. Barnlund, 74, of Hudson and formerly of Donovan passed away on Monday, October 12, 2020 at Bickford of Bloomington in Bloomington, IL. Gary was born May 21, 1946 in Watseka, the son of Maurice and Emilie (Winslow) Barnlund and they preceded him in death along with his step-father, Fabien Lareau and one sister, Sharon Conrad. He married Anna Fulton on September 22, 1973 in Bourbonnais and she survives. Besides his wife, Anna Barnlund of Hudson, he is survived by two sons, Erik Barnlund of Hudson and Kris (Colleen) Barnlund of Normal; five grandchildren, Kaylor, Ashlyn, Rowen, Shay, and Hana; one brother-in-law, Richard Conrad of Donovan; several nieces and nephews, great nieces and nephews, and great-great nieces and nephews. Mr. Barnlund was a heavy equipment operator within the Terre Haute Local Union. He was Highway Commissioner for Beaver Twp. for 37 years, a member of the Beaver Fire Dept., where he served as fire chief for a period of time. Gary was quite the collector of Wheel Horse tractors and was a woodworker and wood turner, and was well known in the area for turning and selling pens. His biggest claim to fame was that the hosts of American Pickers “picked” his garage. He loved to ride his Gold Wing motorcycle, was a big fan of John Force and his daughters with NHRA, and was also an avid fan of Maxlider Brothers. His quick wit is something that will always be remembered. An outside visitation will be held at St. Mary’s Catholic Cemetery in Beaverville on Saturday, October 17, 2020 from 10:30 a.m. until the 12:00 p.m. funeral service. Rev. Kevin Nourie will officiate. Memorials may be made to the Beaver Fire District. The family requests those attending wear a mask and practice social distancing guidelines. Arrangements by Baier Funeral Home in Watseka.

Gary S. Barnlund, 74, of Hudson and formerly of Donovan passed away on Monday, October 12, 2020 at Bickford of Bloomington in Bloomington, IL. Gary was born May 21, 1946 in Watseka, the son of Maurice and Emilie (Winslow) Barnlund and they... View Obituary & Service Information

The family of Gary S. Barnlund created this Life Tributes page to make it easy to share your memories.

Gary S. Barnlund, 74, of Hudson and formerly of Donovan passed...

Send flowers to the Barnlund family.