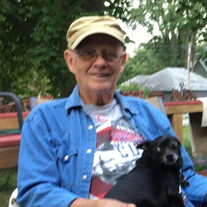 James “Jim” H. Roberts, 85 of Watseka, passed away on Monday, July 13, 2020 at his home surrounded by his family. He was born on October 8, 1934 in Watseka, the son of Irvin and Virginia (Elson) Roberts. He married the love of his life, Gloria Anderson at St. Edmund Catholic Church in Watseka on May 31, 1958. He is survived by his wife, Gloria; two daughters, Dawn (Rev. Jeff) Hammer of Johnson City, TN and Dr. Darlene Roberts of Watseka; three grandchildren, Mindy (Justin) Cavaness of Fairbury, Samantha (Scott) Hardman of Pontiac and Matthew (Rebecca) Hammer of Jonesborough, TN; ten great-grandchildren, Tristin, Kevin, Gabbie, Hunter, Kaden, Alyssa, Isaiah, Luke, Matthew, and Kayla; one brother, Seba Roberts; one sister, Lucille Hammersley; and many nieces and nephews. He was preceded in death by his parents; one brother, Charles Roberts; and three sisters, Maybelle Laffoon, Beverly Eckstein, and Ruth Leppard. Mr. Roberts was a member of St. Edmund Catholic Church in Watseka and Watseka American Legion Post #23. He was a U.S. Army veteran and had a great love for his country and the U.S. flag. He worked as a mechanic at Watseka Ford for 48 years and enjoyed woodworking, traveling with Guy and Shirley, and was a lifelong Cubs fan. Jim was known for his great love for his wife Gloria and the sweet poetic notes he would write for her. Private funeral services will be held on Friday, July 17, 2020, with a public graveside service following at 12:00 p.m. at G.A.R. Cemetery in Watseka with full military honors. Public visitation will be held from 4:00 p.m.-7:00 p.m. on Thursday, July 16, 2020 at Baier Funeral Home in Watseka. Memorials may be made to the family.

The family of James "Jim" H. Roberts created this Life Tributes page to make it easy to share your memories.

Send flowers to the Roberts family.