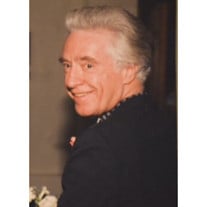 Keith Allen Schmidt of Dallas, Texas was born at home in Cissna Park, Illinois, on December 10, 1934. He grew up in Watseka, Illinois, graduating from Watseka High School in 1953. He went on to pursue his BBA ('57) and MBA ('65) degrees at Northwestern University in Evanston, Illinois, and earned his CPA designation in 1969. He began his banking career in Chicago at American National Bank, continuing at Republic Bank of Dallas where he served as a loan officer, executive trainer/ recruiter and Senior Executive Vice President. Before retiring, he served as an Export-Import banking specialist at Texas Central Bank of Dallas. Keith generously gave of his time and talents, serving as treasurer at Church of the Epiphany in Richardson, The Richardson Symphony Orchestra, The Epilepsy Foundation of Texas and the DFW chapter of the Northwestern University Alumni Association. He was a strong supporter and enthusiast of the Sugar Creek Opera as well. In addition, for many years he enjoyed tutoring accounting students at Richland College in Dallas. Keith had many passions, most notably Chicago Cubs baseball. As a lifelong Cubbies fan, he took the greatest pleasure to finally celebrate the Cub's World Series win in October 2016. He was also a passionate Michigan Wolverine fan. He was an accomplished jazz pianist. In his retirement, he continued his pursuit of excellence in this area through on-going study at the University of North Texas in Denton. He was a lifelong learner, expanding his knowledge and interests through world travel, reading and participation in Southern Methodist University's continuing education classes. He also enjoyed physical exercise, participating in sailing, golf and local running races though his late 70's. His children have numerous fond memories of their special dad. Keith's son, John, spent many memorable weekends with his dad, sailing on White Rock Lake. He is grateful for Keith's presence and support at his running competitions in high school and beyond. His daughter, Natalie, is most appreciative of Keith's dedication to Luke, Charlie and Jake, his grandsons in Iowa, supporting their athletic, academic and musical endeavors. His daughter, Michelle, will be forever grateful for the encouragement he gave to his grandson, Andrew, and for the financial support he gave to help his granddaughter, Madeleine, through her journey with autism. Keith is survived by his daughter, Michelle Dickson and her husband Kenny, daughter Natalie Kliegl and her husband Art, son John Schmidt and his wife Stephanie, and his five grandchildren, Luke, Charlie, Andrew, Madeleine and Jake. Keith is also survived by his longtime friend and special companion, Jeannie Ball; sister-in-law, Carolyn Schmidt; and first wife, Penny Bonneau. He was preceded in death by his brother, Lowell Schmidt and his parents, Ralph and Velma Schmidt. A memorial service will be held on Saturday, August 5th at 11:30 am at the United Methodist Church of Watseka.

Keith Allen Schmidt of Dallas, Texas was born at home in Cissna Park, Illinois, on December 10, 1934. He grew up in Watseka, Illinois, graduating from Watseka High School in 1953. He went on to pursue his BBA ('57) and MBA ('65) degrees at Northwestern... View Obituary & Service Information

The family of Keith Schmidt created this Life Tributes page to make it easy to share your memories.

Keith Allen Schmidt of Dallas, Texas was born at home in Cissna...

Send flowers to the Schmidt family.