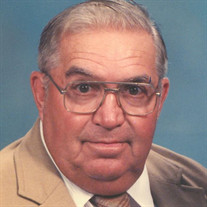 Linard Ray Kessinger, 95, of Watseka passed away December 24, 2019. He was born September 29, 1924 in Colfax IL, son of Frank Kessinger and Laura Bratcher Kessinger Howe. He married Minerva Mae Behrens on August 11, 1946. She survives. Linard and Mini were married 73 years. Also surviving are a daughter, Susan (Charles) Arbuckle of RR Dewey, IL; and a son Dennis (Dianne) of Peyton CO; 3 grandchildren, John (Holly) Arbuckle, Newcastle, ME, Kristen (Tom) Arbuckle Lalley, Washington DC, and Dustin Kessinger, Parker, CO; 4 greatgrandchildren, Noah Arbuckle. Zea Mary Arbuckle, Jane Lalley and Eamon Lalley; a sister in law, Betty (Poody) Kessinger, Watseka; Also many nieces and nephews, inc. Shirley (Bob) Bratcher McCullough; Sharon (Jim) Brank, Watseka, Wally (Colleen) Frohling, San Antonio TX, and Cindy Kohlenberg, Bloomington, who were of special support as his health failed. He was preceeded in death by his parents, 2 brothers, Glenn and Willard (Poody), and 3 sisters, Alice Leonard, Londa Bea Frohling, and Lola Lee Schultz. Linard was a teacher in Woodland, Crescent City and Donovan. He worked as a sales rep for A.O. Smith, Kankakee. He also worked "on the hard road" for Reeves Bros in Milford during summers off teaching. He was a devoted husband and father. He loved camping, playing cards with family, traveling in a motor home in a family caravan, and reading. He was a senior at WCHS when the US entered WWII. He worked at a factory all summer, thinking the war would be short lived. In August, he enlisted in the USMC, turning 19 at Boot Camp and shortly after, was on a Navy transport to the South Pacific. He saw battles in the Marianas and Enewetak. He was wounded by a sniper in Guam & received a Purple Heart. He is a member of Calvary Lutheran Church. A visitation will be held at in Watseka at Baier Funeral Home Sunday, 29 December, 4pm til 7pm. The funeral is at Calvary Evangelical Lutheran Church, 30 December, at 11am. Burial will follow at Oak Hill Cemetery in Watseka. The Rev. G. Robert Heimgartner will officiate. The family requests no flowers. Memorials may be made to Calvary Lutheran Church Pre School or Iroquois Memorial Hospice.

The family of Linard Ray Kessinger created this Life Tributes page to make it easy to share your memories.

Send flowers to the Kessinger family.