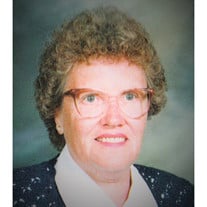 Margaret “Margie” Atkins, 82, of Watseka, Illinois, passed away on Thursday, May 19, 2016. She was born on January 6, 1934 in Clarksville, TN, the daughter of Louis Jackson and Barbara (Johnson) Jackson. Margaret worked as a Dietician for IMH in Watseka for over 30 years. She also volunteered for meals on wheels. She enjoyed walking, baking, word search puzzles, reading, and the White Sox. Surviving Mrs. Atkins is one son, Mike Atkins and Mike’s father Bob Atkins of Watseka; one brother, Jesse Jackson of Clarksville, TN; and seven nieces and nephews. She is also preceded in death by both her parents; one sister, Virginia Walker; one brother, L.T. Jackson; sister-in-law, Barbara Jackson; brother-in-law, Cecil Walker; and one nephew, Richard Walker. Visitation will be held on Saturday, May 28, 2016 from 9:00 am until 11:00 am, at Baier Funeral Home. Funeral Services will be held on Saturday, May 28, 2016 at 11:00 am, at Baier Funeral Home. Pastor Joseph Hughes will officiate. Burial will follow at Oak Hill Cemetery. Memorials in Mrs. Atkins's name can be made to the family of Donor’s Choice.

The family of Margaret "Margie" Atkins created this Life Tributes page to make it easy to share your memories.

Send flowers to the Atkins family.