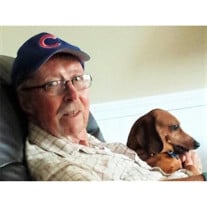 Marion Keith, 76, of Watseka, IL, passed away on Tuesday, August 9, 2016. He was born on April 5, 1940 in Danville, IL, the son of Clyde Keith and Lera (Vigus) Keith. Mr. Keith married Betty Munson on April 18, 1987 at the Christian Church in Milford, IL. Marion worked for American Can before retiring and was a body mechanic for 30 years. He enjoyed riding motorcycles, loved nature, and his dog Buddy. Surviving Mr. Keith is his wife, Betty Keith of Watseka; children, Terry and Cinnamyn Keith of Hoopeston, Jeff and Teresa Harding of Arkansas, Greg and Rhonda Krugh of Arizona, and Jayme and Tina Keith of Washington; step-children, Becky and Roger England of Woodland, Ray Leppard and Michelle Leppard of Hoopeston, Barry and Rochelle Leppard of Ohio, Benny and Donna Leppard of Florida, Brenda and Eric Dawson of Milford, Burt and Pam Leppard of Crescent City, Eric and Mary Setty of Watseka, Bobby Hartman of Watseka, and Tracie Hartman of Hoopeston; one brother, Tom and Penny Keith of Wellington; one sister, Shirley and Pat York of Hoopeston; twenty-five grandchildren; twenty-nine great-grandchildren; many nieces and nephews; and his best friend, puppy Buddy. He is also preceded in death by his parents; twin sister Marilyn; and two great-grandsons. Visitation will be held on Friday, August 12, 2016 from 10am to 12pm (Noon), at Baier Funeral Home in Watseka. Funeral Services will be held on Friday, August 12, 2016 at 12:00 pm (Noon), at Baier Funeral Home in Watseka. PJ Parker will officiate. Memorials in Mr. Keith's name can be made to the American Cancer Society. Cremation rites will be made accordingly following services.

The family of Marion Keith created this Life Tributes page to make it easy to share your memories.

Marion Keith, 76, of Watseka, IL, passed away on Tuesday, August...

Send flowers to the Keith family.