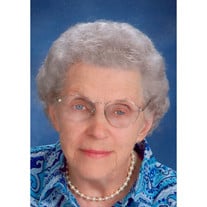 Mildred V. Brutlag, 96, of Watseka, Illinois, passed away on Saturday, February 18, 2017 in Urbana, IL. She was born on Sunday, August 15, 1920 in Crescent Township, IL, the daughter of Walter & Emily (Hopmann) Scheiwe. Mildred married John Brutlag on March 9, 1940, who has since passed. Mildred was a homemaker, housekeeper, and also worked for the Crystal Foods Spice Plant. She considered her faith and her family top priorities in life. She was a member of St. Paul’s Lutheran Church, Ladies Aide, and Lutheran Women Missionary League. Mildred was an excellent cook, seamstress, and a great listener. She was also an avid card player. Surviving Mrs. Brutlag are her sons and daughters-in-law, Dale (Karon) Brutlag, Dave (Rita) Brutlag, & Joel (Carolyn) Brutlag; daughters and son-in-law, June Harvey & Kathy (Mike) McKinney; sisters and brother-in-law, Velma (Allen) Carley & Marian Taden; nineteen grandchildren; forty-six great-grandchildren; one great-great-grandchild; and many nieces and nephews. She is also preceded in death by her parents; husband; and two great grandchildren, Marissa Brutlag & Addison Brutlag. Visitation will be held on Tuesday, February 21, 2017 at the Baier Funeral Home from 4-7pm. Funeral Services will be held on Wednesday, February 22, 2017 at 11:00 am at St. Paul’s Lutheran Church in Woodworth, IL. A one hour visitation will be held prior to services. Pastor Matthew Montgomery will officiate. Burial will follow at St. Paul’s Cemetery in Woodworth, IL. In lieu of flowers the family wishes for memorial contributions to be made to St. Paul’s Lutheran Church or Donor’s Choice.

The family of Mildred V. Brutlag created this Life Tributes page to make it easy to share your memories.

Send flowers to the Brutlag family.