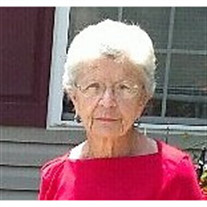 Norma Genevive Elliott, 86, widow of Cecil A Elliott, died peacefully Sunday, February 5, 2017, in Spartanburg SC surrounded by her family. She was born on October 27, 1930, in Onarga IL, the daughter of James and Sadie Hoel Rohr. Her parents... View Obituary & Service Information

The family of Norma G. Elliott created this Life Tributes page to make it easy to share your memories.

Send flowers to the Elliott family.