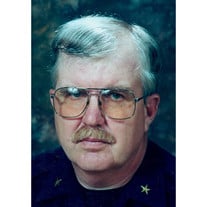 Richard “Dick” Corke, 67, of Watseka, Il, passed away on Saturday, October 22, 2016. He was born on November 10, 1948, the son of Stanley Corke and Ruth (Bouhl) Corke. Richard married Cindy Grimm on September 28, 1988 in Barron, WI. Mr. Corke served in the ARMY as a Military Police. He was a Watseka City Police officer for thirty years, before retiring as Chief. He then went on to become Cissna Park town police officer for ten years. Richard also worked part-time for the Iron Horse as security. He was a member of the Cissna Park American Legion, the Iroquois County DTSB, and was an Alderman for Watseka. Richard was an avid fisher man who also enjoyed hunting, gardening, doing handy work, traveling, but only by car and watching the CUBS play. Surviving Mr. Cork is his wife, Cindy Corke of Watseka; one sister and brother-in-law, Rita and Dave Brutlag of Hudson, IL; four special cats, Buttercup, Snickers, Wayne, and Garth; and seven nieces and nephews. He is also preceded in death by both parents; one brother, Ron; one sister-in-law, Sheila; and one brother-in-law, John Skawinski. Visitation will be held on Wednesday, October 26, 2016 form 4-7pm, at Baier Funeral Home. Funeral Services will be held on Wednesday, October 26, 2016 at 7:00 pm, at Baier Funeral Home. Pastor Gary Minard will officiate. Burial will be held at a later date. Memorials in Mr. Corke's name can be made to the American Cancer Society, IMH Hospice, or IMH Auxiliary. Cremation rites will be made accordingly following services.

The family of Richard "Dick" Corke created this Life Tributes page to make it easy to share your memories.

Send flowers to the Corke family.