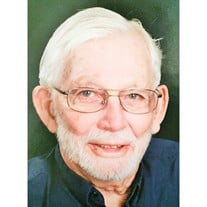 Robert “Bob” “Grandpa O’Bob” Hartman, 85, of Sheldon, IL, passed away on Saturday, October 31, 2015. He was born on March 14, 1930 in Milford, IL, the son of Harold Burnison Hartman and Maud (Rush) Hartman. Robert married Phyllis Brubaker on July 1, 1956 in Sheldon, IL. Mr. Hartman was in the US Air Force from 1949 to 1953 and served in Alaska, England, and North Africa. He was a farmer for his father and father-in-law, and later for himself. He also, worked as a Crop Adjuster for Country Companies for 44 plus years, before retiring at age 81. For a while he drove a charter bus for Crawford Bus Services. Robert was the Co-Owner for Hartman Packaging Services for 26 years, where he was known to others as the “Candy Man”- passing out samples of chocolate and Tootsie Rolls. In his spare time he sometimes he worked as a carpenter, renovator, and painter. Robert was the Secretary for the Farm Bureau Board for 3 years. A member of Iroquois County Fair Board, in which he helped move the fairgrounds from the Milford High School to the present Crescent City site. Part of the Young Farm Bureau Leaders member, where he debated at state finals with John Block (Presidents Reagan’s Secretary of Agriculture) and a Sheldon Lions Club Member where he held nearly every office. Mr. Hartman also helped Sheldon Jaycee’s that started “Fun Days”. He enjoyed his children, grand kids, great grandkids, coin and stamp collecting, making pies from scratch and sharing with friends, helping gather funds for Relay for life, playing scrabble, chess, and risk games, and socializing with friends over coffee. Mostly of all being available for the Lord’s Service during all of his different fellowships. Surviving Mr. Hartman is his wife, Phyllis Hartman of Sheldon; two sons and daughter-in-laws, Todd and Margo Hartman of Charleston, IL, and Marty and Julie Hartman of Greenville, SC; two daughters and son-in-law, Laurie and Roger Poindexter of Fowler, IN, and Gena Hornbuckle of Brook, IN; two sisters, Barbara Moore of Arlington Heights, IL, and Nancy Crist Plainfield, IL; two sister-in-laws, Betsey Hartman of San Diego, CA, and Dean Hartman of St. Louis, IL; grandchildren: Matthew Poindexter, Daniel and Terry Poindexter, Christa Poindexter, Josh and Megan Shufflebarger, Sadie Rae and Toby Sylvester, Sara and David Gonzalez, Ryan Lane, William and Amy Hornbuckle, Ian Shepard, and Taylor Shepard, Emma Hartman, and Jacob and Ashley Hartman; great-grandchildren, Eli Hornbuckle, Josie Hornbuckle, Jordyn Poindexter, Tristan Brown, Josie Rae Sylvester, Adriana and Allyson Gonzalez, Coltyn, Sophia, and Kinley Shufflebarger; and many nieces and nephews. He is also preceded in death by both parents; many brother and sisters; and one grandson, Stephen Poindexter. There will be a Gathering of Friends on Sunday, November 15, 2015 from 2-3pm at Trinity Church in Watseka, IL. A Memorial Service will be held on Sunday, November 15, 2015 at 3:00 pm, at Trinity Church in Watseka, IL. Pastor Marty Schoenleber will officiate. Burial will take place at Sheldon Cemetery in Sheldon, IL at a later date. Memorials in Mr. Hartman's name can be made to Trinity Church, IMH Hospice, American Cancer Relay for Life, Wordsower Liberia, Cru Jesus Film, or Pregnancy Choices.

The family of Robert Hartman created this Life Tributes page to make it easy to share your memories.

Send flowers to the Hartman family.