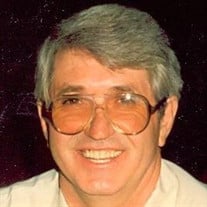 Robert Neal, 84, of Watseka, IL, passed away on Tuesday, June 25, 2019. He was born May 2, 1935 in Sunnybrook, KY, the son of Osco Neal and Ruth (Albertson) Neal. Robert married Patricia Schmohe on August 8, 1981 in Vanderbilt, MI. Bob was the owner and operator as well as a mechanic of Neal Implement Repair. He was a village board member for Crescent City and a member of the ICLEA. He enjoyed fishing, gardening, and his grandchildren. He served in the ARMY. He was a part of the 101st Airborne Screaming Eagles, as well as the Rifle Team in Germany. Robert guarded Rudolph Hess (deputy fuhrer) in the Spandau Prison. Surviving Mr. Neal is his wife, Patricia Neal of Watseka; sons, Lance Cawthon of Watseka, IL and David Jones; daughters, Kelly and Jeff Berry of Watseka, and Lisa and Dick Schofield of Louisville, KY; brothers, Dennis and Beverly Neal of Rossville, and John Neal of Portland, OR; five grandchildren, Trevor, Kassidy, and Ty Berry, and Killian and Teagan Cawthon; and many nieces and nephews. He is also preceded in death by his parents; brothers, Charles and Ralph; and sisters, Betty Drollinger and Dean Hartman. Visitation will be held on Monday, July 1, 2019 from 4-7pm, at the Watseka American Legion Building (968 S. 4th Street) in Watseka, IL. Memorial Service will follow at 7:00 pm. Pastor Roy Johnson will officiate. Memorials in Mr. Neal’s name can be made to IMH Hospice, IMH Resident Home, or the First Christian Church.

The family of Mr. Robert Neal created this Life Tributes page to make it easy to share your memories.

Send flowers to the Neal family.