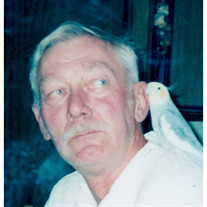 Ronald F. Kottke, 70, of Papineau, IL, passed away on May 31, 2016 at his home. He was born on May 15, 1946 in Paxton, Illinois, the son of Edward Kottke and Orilla (Zabel) Kottke. Ronald married Trudy Watts on January 16, 1986 in Watseka. Mr. Kottke served in the ARMY for two years during Vietnam. He was a member of the Aroma Park American Legion. Ronald worked Construction in the Kankakee area. He enjoyed fishing, gardening, the CUBS, NASCAR, and his dogs. Surviving Mr. Kottke is his wife, Trudy Kottke of Papineau, IL; one son, Jason Kottke of Watseka; three daughters and son-in-law, Tonia Kottke of Watseka, Shannon (Kelly) Rogers of Watseka, and Teresa Keefer of Marion, IN; one sister and brother-in-law, Arlis and Lonnie Johnson of Montrose, MN; grandchildren, Tasha Laird, Alivia Norrgran, Ashley Ulitzsch, Mercedes Sullivan, Dustin Houser, Tonia Keefer, Adrianna Richardson, Brittany Williams, and Brianna Williams; great-grandchildren, Jordan Kraay, Blayden Houser, Addison Williams, Adalynn Ulitzsch, and Arianna Ulitzsch; several nieces and nephews. He is also preceded in death by both parents; and two brothers, Marvin Kottke and Raymond Kottke. Visitation will be held on Friday, June 3, 2016 from 4-8pm, at Baier Funeral Home in Watseka. Funeral Service will be held on Saturday, June 4, 2016 at 11:00 am, at Baier Funeral Home. A one hour visitation will take place prior to services. Pastor Joseph Hughes will officiate. Burial will follow at Papineau Cemetery in Papineau, IL. Memorials in Mr. Kottke's name can be made to the Families Wishes.

The family of Ronald F. Kottke created this Life Tributes page to make it easy to share your memories.

Send flowers to the Kottke family.