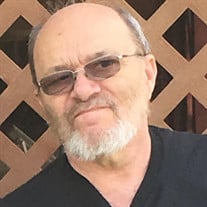 Ronald L. Smith, 66, of Watseka, passed away Monday, January 28, 2019, in his home after a lengthy illness. He was born on April 20, 1952, the son of Evelyn Pries-Smith. He married his wife Kathleen Finney (Kathy) on May 6, 1989. Surviving are his wife, one son, Andrew Smith, two daughters, Bobbie and Kristy Smith, all of Watseka, daughter in law Maria Cresswell-Smith of Milford, five siblings, Marie Dean of Kankakee, Joyce Landry of Arkansas, Harry Smith (Junior) of Gilman, Nita (Bill) Burnett of Oklahoma, and Janice Brackman of Bloomington. Also surviving are grandchildren Amanda Smith, Kory (Katie) LaPorte, Christian LaPorte, and Lyxi Schaumburg, as well as 3 great grand-children, many nieces and nephews, and his faithful four-legged friend, Baxter. Preceding him in death are his mother, Evelyn, his siblings Charles Pries, Norman Smith, Charlene Weidert, and LaRay Smith, as well has his granddaughter, Shelby Smith. Ron was most known for his home business, Ron's Bicycle Repair, that he owned and operated for over 25 years. He was also employed by the Sea Sprite boat factory in Crescent City for more than 25 years. He then worked at Viskase (Kentland, IN) for 8 years, then went back to school at KCC and received his HVAC certification. He most recently was employed by Flanders in Momence until 2015. Visitation will be Friday, February 1, at Baier Funeral Home in Watseka from 2-5pm at the Baier Funeral Home in Watseka, with the funeral following the visitation. Burial with graveside services will take place Saturday, February 2, 2019 at 9:00 am at Oak Hill Cemetery in Watseka, IL. Memorials in Mr. Smith’s name can be made to the Family’s Wishes.

The family of Mr. Ronald Smith created this Life Tributes page to make it easy to share your memories.

Send flowers to the Smith family.