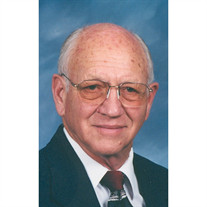 Russell T. Wessels, 89, of McAllen, TX, formerly of Watseka, IL, passed away on Wednesday, May 31, 2017 at his home in Texas. He was born on September 22, 1927, the son of Walter and Frances (Butzow) Wessels. Russell married Darlene Dienst in 1957. She passed in 1999. Russell later on married Glendora Leonard on June 21, 2001. Mr. Wessels was a farmer. He also worked at John Deere and then for the State of Illinois before retiring. He enjoyed gardening, traveling, golfing, and spending his winters in Texas. Surviving Mr. Wessels is his wife, Glendora Wessels of Texas; sons and daughter-in-law’s, David and Wendy Wessels of Bloomington-Normal, IL, and Dean and Becky Wessels of Knoxville, TN, daughter and son -in- law, Debra and Rick Bindler of Naperville, IL, step-children, Susan and Tom Riley of Dayton, OH, and Cindy and Chuck Clagg of North Hampton, OH; grandchildren, Nora and Derrick Wessels, Joseph and Jacob Wessels, Claire and Natalie Bindler, step-grandchildren, Brian and Cara Kite, Andrea and Carl Disalvo, Stacy and Andrew Wildman, and Carisa and Brian Davis, step-great-grandchildren, Jackson, Benjamin, Zachary, CJ, Logan, Brenden, Dylan, Sydney, and Addison; several nieces and nephews. He is also preceded in death by both parents; first wife, Darlene; and two sisters, Natalie Wessels, and Irma Mueller. Visitation will be held on Thursday, June 22, 2017 from 4-7pm, at Baier Funeral Home in Watseka, IL. Funeral Service will be held on Friday, June 23, 2017 at 11:00 am, at Calvary Lutheran Church in Watseka, IL. Pastor Donald Love will officiate. Burial will follow at Oak Hill Cemetery in Watseka, IL. Memorials in Mr. Wessels's name can be made to the Calvary Lutheran Church or the American Legion Post #23.

Russell T. Wessels, 89, of McAllen, TX, formerly of Watseka, IL, passed away on Wednesday, May 31, 2017 at his home in Texas. He was born on September 22, 1927, the son of Walter and Frances (Butzow) Wessels. Russell married Darlene... View Obituary & Service Information

The family of Russell Wessels created this Life Tributes page to make it easy to share your memories.

Send flowers to the Wessels family.