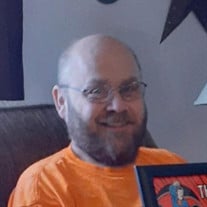 Shane A. Reynolds, 49, of Iroquois passed away on Monday, September 27, 2021 at AMITA St. Mary’s in Kankakee. Shane was born February 27, 1972 in Brook, IN, the son of Alton and Zora (Koenig) Reynolds. He married DeAnn McVey on May 30, 1992 in Donovan. He is survived by his wife, DeAnn Reynolds of Iroquois; one daughter, Justine Reynolds of Watseka; mother and father in-law, Janet and Jerry McVey of Donovan; three sisters, Kim (Roy) Leach of Pacifica, MO, Yvonne Pylant of Reynolds, IN, and Michelle (William McCormick) Reynolds of Kentland, IN; and; one brother, Dana Reynolds of Indianapolis, IN; and several aunts, uncles, cousins, nieces, and nephews. He was preceded in death by his parents; one daughter, Arielle; one brother, Blane Reynolds and one niece, Kayla Kaleshoff; and one nephew, Anthony Martin. Shane loved reading about politics. He enjoyed the outdoors, especially fishing, golfing, and hunting. Visitation will be from 10:00 a.m. until the 12:00 p.m. memorial service on Monday, October 4, 2021 at Baier Funeral Home in Watseka. Rev. Kevin Nourie will officiate. Burial will follow at Morris Chapel in Iroquois. Memorials may be made to family’s wishes.

The family of Shane A. Reynolds created this Life Tributes page to make it easy to share your memories.

Shane A. Reynolds, 49, of Iroquois passed away on Monday, September...

Send flowers to the Reynolds family.