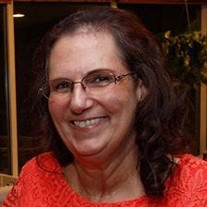 Sheryl L. Cox, 62 of Watseka passed away on January 7, 2022 at Riverside Medical Center in Kankakee. She was born on May 29, 1959 in Aberdeen, SD a daughter of Henry and Evonne (Kiesz) Hopfinger. Sheryl married Steven J. Cox in Aberdeen, SD on March 29, 1985 and he survives. Also surviving are six children- Joshua (Michelle) Cox of Bloomington, IL, Jennifer (Lawson) Plummer of San Antonio, TX, Jill Saenz of San Antonio, TX, Karissa (Jordan) Schoon of Watseka, Kayla (Zachary) Nichoalds of Crescent City, and Kurtis (Kelsey) Cox of Lewistown, MT; mother- Evonne Hopfinger of Aberdeen, SD; two sisters- Vicki (Lloyd) Jerde of Aberdeen, SD, Lori Coy of Oakland, NE; one brother-David Hopfinger of Aberdeen, SD; eleven grandchildren- Lydia Klaus, Charlotte, Maverick and Myla Cox; Kaiden, Klaus, Killian, Keanu, Blake and Bristol Schoon; Osena Nichoalds. She was preceded in death by her father- Henry Hopfinger and brother-in-law- Albert Coy. Sheryl was a member of Faith Lutheran Church in Watseka. She worked as a graphic artist and enjoyed fishing, camping, puzzles and bicycling. She was happiest while spending time with her family. The most fulfilling moments were spent with her grandchildren. Sheryl's life would seem too short to many, but those of us who were blessed to be touched by her understand that her existence and the imprint she left on our hearts exceeds the quantity of time that she stayed here. Funeral services will be held on Friday, January 14, 2022 at 12:00 noon at the Baier Funeral Home in Watseka with Rev. Alex McNally officiating. Visitation will be held two hours prior to the service. Memorials may be made to the National Multiple Sclerosis Society. Please share a memory of Sheryl at www.baierfuneralhome.com

Sheryl L. Cox, 62 of Watseka passed away on January 7, 2022 at Riverside Medical Center in Kankakee. She was born on May 29, 1959 in Aberdeen, SD a daughter of Henry and Evonne (Kiesz) Hopfinger. Sheryl married Steven J. Cox in Aberdeen, SD... View Obituary & Service Information

The family of Sheryl L. Cox created this Life Tributes page to make it easy to share your memories.

Send flowers to the Cox family.