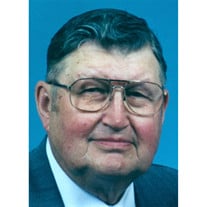 Victor G. Schuldt, 95, of Woodworth, Il, passed away on Thursday, April 9, 2015. He was born September 28, 1919, in Woodworth, the son of William and Bertha (Pfingsten) Schuldt. He married Alma Hankey on February 14, 1949 in Kankakee. She passed away on March 21, 2014. Mr. Schuldt farmed the farmland his grandfather purchased when he came to America from Germany. He retired from farming when he was 65. Victor was a lifelong member of St. Paul’s Lutheran Church in Woodworth, IL, where he served on many committees and boards. He served on the Milford Township High School board for 12 years. He also served in WWII as a Mess Sgt. in the European Theater. He earned four bronze Battle Stars, three Overseas Service Bars, one Service Stripe, and a Good Conduct Medal. He was a lifelong member of the American Legion. After he retired, he enjoyed volunteering at the Illinois Veterans Home at Manteno, IL. Surviving Mr. Schuldt is one son and daughter-in-law, Damon and Gayle Schuldt; one daughter and son-in-law, Denise and Robert Harwood; three grandchildren, Jon and Jami Harwood; Jason and Alisha Harwood; and Nicole Schuldt; two step-grandchildren, Kelly and LeighAnn Lareau; Anthony J Lareau; one step-great-grandchild, Paige and Shane Lareau; and several nieces and nephews. He is also preceded in death by both his parents; wife, Alma Schuldt; one brother; four sisters; and one infant daughter, Yvonne Schuldt. Visitation will be held Sunday, April 12, 2015 from 4-7pm, at Baier Funeral Home in Watseka. Funeral Services will be held Monday, April 13, 2015 at 11:00 am, at St. Paul’s Lutheran Church in Woodworth. A one hour visitation will be held prior to services. Pastor Benjamin Meyer will officiate. Burial will be held at St. Paul’s Lutheran Cemetery in Woodworth, Il. Memorials in Mr. Schuldt's name can be made to the St. Paul’s Lutheran School at Woodworth, Our Savior’s Radio Ministry, and the Milford Ambulance Service.

The family of Victor Schuldt created this Life Tributes page to make it easy to share your memories.

Send flowers to the Schuldt family.