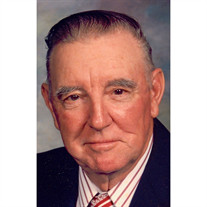 William “Howard” Orcutt, 92, of Watseka passed away on Sunday March 12, 2017 at home surrounded by family. He was born on April 29, 1924 in Stockland Township, the son of John and Dona (Hocutt) Orcutt. He married Virginia West on September 15, 1946 at the bride’s parent’s home because the Belmont Church had burned earlier that summer. Surviving are his wife, Virginia (West) Orcutt; one daughter, Kathryn (Cory) Rozenberg of Scandinavia, WI; one son, Kim Orcutt of Rantoul, IL; seven grandchildren; seventeen great-grandchildren; and two great-great-grandchildren. Also surviving are two sisters, June (John) Perry of Champaign, IL, and Lois (Ben R.) West of Watseka, IL; along with many nieces and nephews. He was preceded in death by both parents; one son, Karl; two brothers, John and Charles Orcutt; and one sister, Charlotte Hamiltion. Howard was a lifelong farmer. He enjoyed carpentry, reading, crop watching, coffee shop talk with friends, and socializing with numerous people. During WWII he served as a radio-gunner on a B-24 Bomber in the CBI theater earning the DFC and the Chinese DFC medals, in addition to three Air Medals. Following graduation from the U of I he started farming and teaching GI classes, as well as substitute teaching at the High School. He was a member of the Masons, Scottish Rite, American Legion, and Farm Bureau. He also served on the School Board, was the Township Assessor, Township Clerk, Conservation Committee, 4-H leader, and others. Visitation will be held at the Woodland Methodist Church at 10:00 am on Saturday, April 15, 2017, until the 12:00 pm (noon) service followed by a Celebration of Life which will be held in the church annex. Rev. David Perry will officiate. Military rites have been made accordingly. Memorials may be made to the Iroquois County 4-H, Carle Hospice, or Donor’s Choice.

The family of William "Howard" Orcutt created this Life Tributes page to make it easy to share your memories.

William “Howard” Orcutt, 92, of Watseka passed away on Sunday...

Send flowers to the Orcutt family.