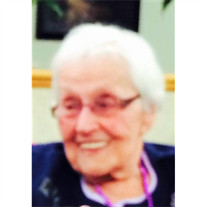 Wilma Tegtmeyer, 91, of Watseka, IL, passed away on Friday, September 9, 2016. She was born on June 21, 1925 in Belmont Township, the daughter of Mannis Martin and Nellie (Strawser) Martin. Wilma married Ernest Tegtmeyer at St. John’s Lutheran Church in Schwer, IL on December 18, 1943. He has since passed. Mrs.Tegtmeyer worked at TRW, Catholic Charities, and was a cook for Woodland Grade School for over 20 years. Wilma enjoyed crossword puzzles and collecting pencils. Surviving Mrs. Tegtmeyer is one son, Larry Tegtmeyer of Watseka, IL; three daughters and son-in-law, Judy and Dan Holder of Bloomington, IL, Arclista Story of North Little Rock, AR, and Arliss Tegtmeyer of Frisco, TX; numerous foster children; one sister and brother-in-law, Theresa and Wesley Clement of Watseka; three grandchildren; five great-grandchildren; and numerous nieces and nephews. She is also preceded in death by both parents; husband, Ernest; one brother; and three sisters. Visitation will be held on Tuesday, September 13, 2016 from 4-8pm, at Baier Funeral Home. Funeral Services will be held on Wednesday, September 14, 2016 at 11:00 am, at Faith Lutheran Church in Watseka. A one hour visitation will be held prior to services. Pastor Jordan Cooper will officiate. Burial will follow at Iroquois Memorial Park Cemetery in Watseka, IL. Memorials in Mrs. Tegtmeyer's name can be made to Iroquois Resident Home, IMH Hospice, or Donor’s Choice.

The family of Wilma Tegtmeyer created this Life Tributes page to make it easy to share your memories.

Wilma Tegtmeyer, 91, of Watseka, IL, passed away on Friday, September...

Send flowers to the Tegtmeyer family.